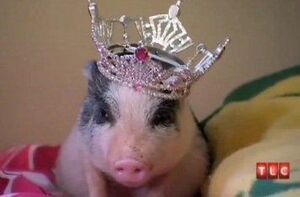 Glitzy is a former pet pig of Alana's, which was given to her as a present after she did not win a pageant. Although Glitzy is a boy, Alana treats him as though he is a girl and refers to him as "a gay pig". During Season 1, June decided to give Glitzy away because of his constant squealing at late hours of the night.

Retrieved from "https://herecomeshoneybooboo.fandom.com/wiki/Glitzy?oldid=5394"
Community content is available under CC-BY-SA unless otherwise noted.